The Next Gen Backstage Heroes Eyeing the £4bn Production Industry

Production Futures – the annual networking, training and inspirational event for the next generation of live event technology heroes – held its annual recruitment event at Fly by Nite Studios in Redditch in November 2019. Now in its fourth year, it offers aspiring young people the chance to come face-to-face with some of the biggest names in the production industry and get hands-on with the tools of the trade. 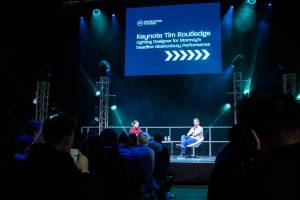 To kick the day off, Hume spoke with Rowe, Bryony October and David Howard to find out more about the essentials needed to ‘make it’ in the industry. Rowe said the buzz words in the world of production are “hard graft,” and went on to say, “It’s vital that you are committed and keen to learn and help with whatever needs to be done. CVs don’t always matter, and you must be willing to do the non-glamourous jobs. Start from the bottom and work your way up.”

The live event industry is worth £4 billion a year for the UK economy and it needs young, career-driven people to keep turning the proverbial wheels. There is a severe lack of knowledge in the wider world about career opportunities in the production industry, although this is slowly improving with colleges and universities offering a wider range of qualifications, there’s still a lot more that could be done to encourage young people to come into this sector. The world will always need to be entertained, so this type of work will never run its course.

FOH sound engineer Bryony October started from the bottom and worked her way up to be well-respected in the world of touring and production. She said, “You need to make yourself stand out, but you can’t afford to be cocky.” She recalled how she started off by selling band merchandise and working as a runner at small-scale and large-scale events. “It all comes down to sacrifice a lot of the time,” she concludes.

Hume also spoke to Stormzy’s Glastonbury LD, Tim Routledge, plus many other well-known groups including Take That and Jeff Lynn’s ELO. Tim, who spends half his time working on TV productions and the other half working on concerts and touring, had plenty of valuable insights for young professionals. He discussed how you don’t have to confine yourself to one type of role in the industry and that it’s important to be well-rounded and willing to learn pretty much anything.

“The Pyramid Stage was complex, but it was the biggest show that went in there,” said Routledge. “We had 50 minutes to rebuild the set after George Ezra had come off the stage, with a team of more than 100 people doing the changeover. We actually only finished setting up three minutes before Stormzy was due to perform.”

An industry veteran, Routledge insists that he is still learning new things every day and states that it’s imperative that you are always willing to learn, try everything and don’t just chase the money – because that will come later. Things are constantly changing in this field of work and it’s not always essential that you specialise in one area. Be a jack of all trades, and a master of some, so to speak.

The afternoon consisted of talks with other top industry professionals, one of which was Ric Lipson of ‘entertainment architects’, Stufish. Lipson, who studied Architecture at University, is now a leading set designer. From the age of 12, he was designing sets, posters and school plays: now, he’s pretty much done it all. “A set can be anything,” he said. “Sets are technically amazing but they also tell a story.”

Lipson knows as well as anyone that there are many different ways of getting into the world of live events. Literature, music, art and architecture are just a few and they’re all massively important skillsets that are easily accessible as college/university courses. It’s all about putting the time and effort into education.

Lipson made an interesting point – concert touring isn’t just about the music anymore, there’s so much more to a show now and people have only recently started to appreciate the visual side of things. “People used to go on tour because of a great album,” he said. “Live music has now become more theatrical and it’s as important visually as it is musically.”

Aspiring designers need to explore what ‘design’ really means. Most of Lipson’s sets start from simple sketches and concept designs. He’s even gone on to design purpose-built concert halls and arenas. “You need to identify what excites you and challenges you and go on from there. What haven’t you done? Go and do that and always be willing to learn!”

All in all, it was a highly successful day, concluding with an awards ceremony for young professionals and freelancers. People went away with more knowledge and insights about what it takes to make it in this industry and hopefully discovered more about not only themselves but the various companies that they could one day be working for or with. The industry is growing and will continue to do so for years to come. Young people are at the heart of its future and it’s important that we get the message out there and raise awareness of the opportunities that await them.

© The Fifth Estate.
This site uses cookies. By continuing to browse the site you are agreeing to our use of cookies.
div#stuning-header .dfd-stuning-header-bg-container {background-image: url(https://thefifthestate.co.uk/wp-content/uploads/2019/12/unnamed.jpg);background-color: #5e5e5e;background-size: cover;background-position: center center;background-attachment: scroll;background-repeat: no-repeat;}#stuning-header div.page-title-inner {min-height: 375px;}